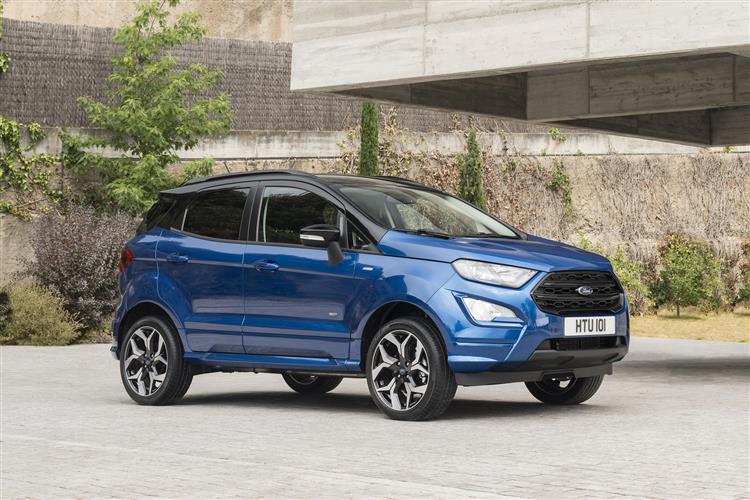 Little by little, Ford is honing its EcoSport small Crossover model into a pretty reasonable contender in its class. In 2015, tweaks to the suspension improved the ride, plus this design got greater refinement, a smarter cabin and the option to do without the rear-mounted spare wheel. In 2016, a pokier 140PS 1.0-litre EcoBoost petrol engine was added in at the top of the range and it's that variant we look at in more detail here as part of the substantially updated improved EcoSport line-up announced in the Autumn of 2017. Like its other range stablemates, this model offers chunky looks that deliver up a bit of Amazonian attitude, even if in truth, this car is more CBeebies than SAS in its take on hostile streetlife. Let's check it out.

We've yet to try this revised EcoSport model but the initial signs are good. You don't go an awful lot faster in this 140PS EcoSport variantl than you would in its 125PS counterpart - but then that's not really the point of a car like this. Rest to 62mph in this range-topper takes 11.8s, which makes this variant about a second quicker than its stablemate. Top speed is 115mph, 3mph more than the 125PS derivative. Torque - pulling power - is rated at 210Nm, 40Nm more than the lesser variant. The on the road dynamics of this model have improved since the original launch thanks to suspension retuning with revised rear twist beam suspension and more carefully considered spring and damper rates for chassis optimisation, plus a 10mm reduction in ride height and optimised Electronic Stability Control and power steering systems. Crossovers of this kind need to drive as much like the superminis they're based on as possible. From here on, the signs are that this one will. There's no 4x4 option (that's restricted to the 1.5-litre EcoBlue diesel variant), but you do get a great raised driving position and a comprehensive package of driver assistance technologies, including Electronic Stability Program and Hill Launch Assist.

If you know your EcoSport models, then you'll recognise this 140PS variant by its shiny black 17-inch alloys and the black contrast finish used on its roof and mirrors. The EcoSport's styling has been brought more into line with the look of Ford's larger SUVs, the Kuga and the Edge. A more sculpted bonnet with a central bulge delivers a cleaner front-end appearance and the front-end design is now dominated by a smarter trapezoidal grille design and distinctive angular headlights that incorporate LED daytime running lights. Angular fog light housings complete a front three quarter profile that was apparently inspired by the straps of a rucksack and was designed to reflect an adventurous character. The EcoSport's rear bumper and tail light designs have also been revised to deliver a cleaner, more sculpted appearance. Customers can continue to choose a boot-mounted spare wheel option. Inside, there are easier to use controls and soft-touch materials, plus a new centre console featuring fewer buttons. New seats designs improve long distance comfort and there's an optional adjustable interior lighting system that can be set to one of seven colours. Smart stowage solutions include a new height adjustable boot floor that can be raised to provide concealed storage, or lowered to increase luggage capacity to 334 litres. That new centre console features a built-in folding, sliding passenger armrest with a storage compartment ideal for tablet computers or snacks. That side-hinged tailgate still accesses a load space that Ford reckons is big enough to swallow a 560-litre washing machine - once the 60/40 split rear seats are folded, that is.

The 1.0-litre EcoBoost 140PS EcoSport model costs around £18,000 and comes only in top-spec trim. That makes this flagship variant priced uncomfortably closely to an entry-level version of Ford's larger Kuga Crossover model. Still, at least top spec 'ST-Line' trim gets you plenty of kit. That means things like sports suspension, 17-inch polished black alloy wheels, a high-end Sony-branded DAB stereo system, a painted black contrast finish for the roof and the mirror housings and rear privacy glass. Equipment levels have been improved and now include Ford's sophisticated 'SYNC 3' communications and entertainment system, which is compatible with Apple CarPlay and Android Auto smartphone-mirroring systems. The 'SYNC 3' set-up is supported by a floating colour touchscreen, which comes in an 8-inch size in this variant. Optional technology includes cruise control with an adjustable speed limiter that helps drivers keep within speed limits. And a rear view camera that makes parking more efficient and safer. You can also have automatic headlights, rain-sensing wipers, a heated steering wheel, Electronic Automatic Temperature Control, an upgraded 4.2-inch digital instrument cluster and power-foldable mirrors. Safety technology includes an optional Blind Spot Information System that can alert the driver to vehicles approaching alongside. And standard Roll Stability Control that adjusts engine torque and braking to help drivers maintain control. Improved occupant protection now includes driver and passenger front airbags, a driver knee airbag, new side airbags and new curtain airbags. Plus the 'Ford SYNC with Emergency Assistance' system directly connects the vehicle occupants to local emergency services operators after an accident in the correct language for the region, using information from the vehicle's on-board GPS unit and mobile network to pinpoint the accident location.

Economy and emissions aren't too far off those of the vehicle this car is based upon, the Fiesta. There's been some small controversy around the 1.0-litre EcoBoost engine not making anything like its claimed fuel economy figures in real world conditions, but that can be said of many small capacity turbocharged petrol engines. It's just a quirk of the NEDC fuel testing program. This 140PS variant claims to manage 52.3mpg on the combined cycle and 125g/km of CO2 - which is exactly the same as the returns you'd get from the lesser 125PS version of this engine. Obviously, you'd to better by opting for the 1.5 EcoBlue diesel; mated up to Intelligent All Wheel Drive, this delivers 52.3mpg on the combined cycle and 119g/km of CO2.

The market for buyers who'll be prepared to spend not much less than around £20,000 on a Ford EcoSport will be relatively small but even for this amount of cash, this flagship variant looks reasonable value if you look at how much more you'll pay in this segment for rivals like Mazda's CX-3 and Honda's HR-V. The performance benefits of the uprated 140PS EcoBoost engine are quite difficult to detect, but they don't impact on efficiency and you do get extra equipment and a more exclusive look at part of the deal. Ultimately, this could well be the most desirable EcoSport variant yet made. How much that will mean to you is another question.